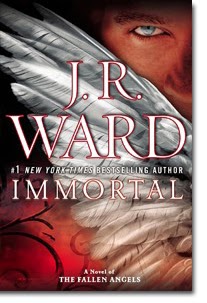 This is an adult paranormal romance series (Rated NC-17)

Seven deadly sins. Seven souls to save. This is the first battle between a savior who doesn't believe and a demon with nothing to lose!

Redemption isn't a word Jim Heron knows much about-his specialty is revenge, and to him, sin is all relative. But everything changes when he becomes a fallen angel and is charged with saving the souls of seven people from the seven deadly sins. And failure is not an option.

If you are expecting the Black Dagger Brotherhood (BDB), you won’t get it. Despite several books being set in Caldwell, and some of the characters from BDB making cameo appearances whether in name or in description, the vampire world or lessors don’t make any impact in this series at all.
In fact, except for the first book and one other, the vernacular (slang) isn’t much used. In the first book, the main guy of the book uses the slang somewhat. And in another book, JRW slips up and Jim talks and dresses somewhat like a brother for a hot second. But then, he’s back to his normal self.
Overall, because it was the Fallen Angel series, I expected Lassiter to make an appearance. Sadly he did not. Although we get a hint of his story. We also get teased to believe that these two series will collide with Lassiter at its center in another spin off or in the BDB series.
Other than that, the writing style of JRW was ever present. How she multilayers stories into one to keep you guessing and wanting more is apart of this series as well.
Personally, I wish we would have gotten more with Nigel and Colin. I love the m/m thing, plus they are angels which really speaks a lot to love is love no matter what.
My favorite book of all in the series is ENVY. I think this book kept me going onto the end. We get insight into Adrian and Eddie’s bromance and Nigel and Colin’s romance. And I’m a lover of all things m/m, so yeah. Too bad, we don’t get much more after that. Yes, there is a bit, but nothing like in this book.
I was disappointed in the ending of the series. Yes, there were a lot of satisfied conclusions. But I think one of them, I hoped for a different outcome. It was probably for the best the way it happened. But I still wanted for more.
My book boyfriend is Adrian. 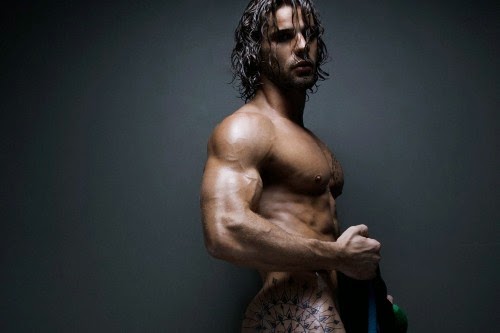 *Disclaimer - I am not the owner of this picture. I found it on the web for causal fun use on my blog for which I receive no compensation. If this picture belongs to you (you are the copyright owner) please let me know and I will remove it.
Posted by My Book Boyfriend at 3:54 AM