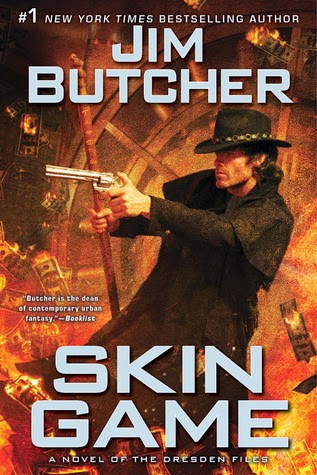 Skin Game (The Dresden Files #15) by Jim Butcher
This is an adult urban fantasy novel (Rated R)
♥♥♥♥
(Four Harry Hearts)
Book Summary
Harry Dresden, Chicago’s only professional wizard, is about to have a very bad day….

Because as Winter Knight to the Queen of Air and Darkness, Harry never knows what the scheming Mab might want him to do. Usually, it’s something awful.

He doesn’t know the half of it….

It’s a smash-and-grab job to recover the literal Holy Grail from the vaults of the greatest treasure hoard in the supernatural world—which belongs to the one and only Hades, Lord of the freaking Underworld and generally unpleasant character. Worse, Dresden suspects that there is another game afoot that no one is talking about. And he’s dead certain that Nicodemus has no intention of allowing any of his crew to survive the experience. Especially Harry.

Dresden’s always been tricky, but he’s going to have to up his backstabbing game to survive this mess—assuming his own allies don’t end up killing him before his enemies get the chance….
My Review


So in this book, Harry is the Harry of old. And I like that. I liked that the cast of characters were brought together again except I really missed Thomas. He is one of my favs. And the story had action and mystery in balance. It was a solid read.
SPOILERS
I loved that there was resolution with Harry and Maggie. I’m so happy that he’s finally become a dad in more ways than one. Two little girls, lol.
I hated that Butters got what Karen deserved. I think Karen could have made a good knight.
I’m tired of Harry not sleeping with women, lol. But at least he made his side of things clear. And this thing with Karen at the end only feels like something to pacify the readers. I remember all too well before he “died” he and Karen were about to get together. I have a bad feeling the next book will start out… Although Karen and I were going to talk, we hadn’t had a chance. Months have passed and I’m not sure if she still feels the same. Blah, blah, blah. And they won’t get together, ugh. He should have gotten it on with Asher or Ana, lol. Or maybe he and Michael’s daughter, Molly…
I really liked Goodman Grey. I predicted what would happen in the vault with him. I wasn’t surprised.
I wonder how Harry will get out of being the Winter Knight and survive.
END OF SPOILERS
Overall, there was a solid story in this book. We learned a lot especially a different side to Mab. There are new questions about Molly and Harry’s future love interest. And we have a new player, new skull, *wink/nod*
If you love urban fantasy, this is one of the great series. Pick it up.
My book boyfriend Michael.

*Disclaimer - I am not the owner of this picture. I found it on the web for causal fun use on my blog for which I receive no compensation. If this picture belongs to you (you are the copyright owner) please let me know and I will remove it.
Posted by My Book Boyfriend at 5:48 PM