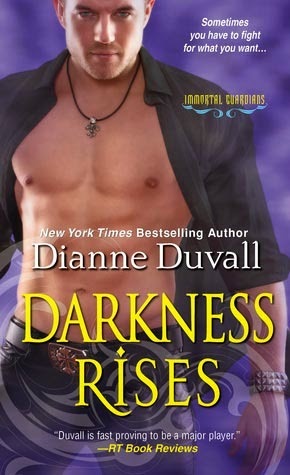 Darkness Rises  (Immortal Guardians #4) by Dianne Duvall
This is an adult paranormal romance novel (Rated NC-17)
♥♥♥♥♥
(Five Kick Ass Hearts)
Book Summary
Krysta is used to getting the drop on vampires. Her "special abilities" aren't much, but the plan is simple--she plays helpless pretty young thing to lure them in. Then her shoto swords come out and it's bye-bye, bloodsucker. Until one night she finds herself with an unexpected ally. He's a vampire, all right, but different. Mysterious. Handsome. And more interested in saving her skin than draining it.

Etienne has been an Immortal Guardian for two hundred years--long enough to know that Krysta is special. He can't stop thinking about her long legs, even more than her short swords. Then he discovers the vamps she's exterminating have friends in high places, and the Guardians are in danger too. He'll have to accept Krysta's help to save them. The stakes for a mortal are high. But the cost to his heart might be higher. . .
My Review


For those that have yet to read this series, let me give you a bit of an insight. These are vampires reinvented and no they don’t sparkle lol (that joke never gets old). Vampires are bad. And although these immortal guardians resemble traditional vampires (in lore) they aren’t.
This series is also not a standalone. Much like J.R. Ward’s Black Dagger Brotherhood, each book features a character and his or her relationship, however, the story continues to evolve. And as such, we don’t lose are favorite characters, they just aren’t the main focus of the next book. So I love that she continues to integrate old and new characters as the series continues.
Even though this book has romance, it has a well thought out story/world building and kick ass action.
This story focuses on Étienne. I’m happy he got his story. I won’t give spoilers. I will say that we have kick ass females and males alike in this one.
I also like that we learned more. And specifically more about Zack. I wonder if he and Lisette are destined but then who will Sean end up with. Questions, questions.
I hate that it will be another year until the next book. But at the same time, each book has been great. Better the author takes her time and gives us another great book, than rush and give us something not so great.
Overall, awesome. If you haven't started this series and love paranormal, it's a must.
Audio Review
Kirsten Potter does an amazing job. She continues to use the voices of the character without changing them. Her accents are great. I don’t think I could listen to this book if she wasn’t the narrator.
My book boyfriend Étienne. 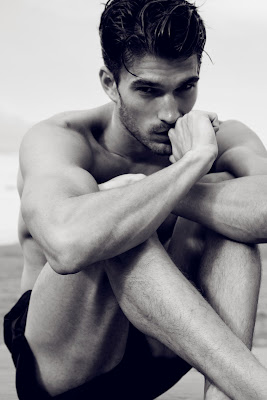 *Disclaimer - I am not the owner of this picture. I found it on the web for causal fun use on my blog for which I receive no compensation. If this picture belongs to you (you are the copyright owner) please let me know and I will remove it.
Posted by My Book Boyfriend at 7:44 AM