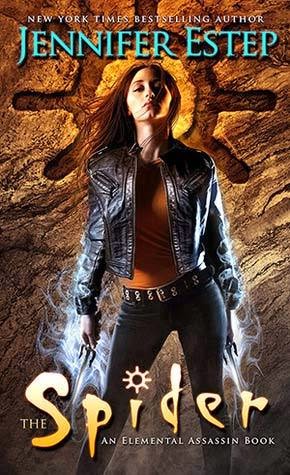 The Spider  (Elemental Assassin #10) by Jennifer Estep
This is an adult urban fantasy novel (Rated NC-17)
♥♥♥♥
(Four Assassin Hearts)
Book Summary
The tenth book in the bestselling and “outstanding” (Romantic Times) Elemental Assassin urban fantasy series finally reveals for the first time the origins of Gin Blanco’s career as the deadliest of assassins.

For the first time, the origins of Gin Blanco’s career as the deadly assassin “the Spider” are revealed in full. In a story that pre-dates the other nine books in the series, Gin Blanco goes through her paces to become the most feared assassin in the Ashland.
My Review
I’m not a blurb reader. Too many give so much of the story away, I can’t enjoy it. So I was surprised that this story was more or less a blast from the past. Sometimes, I want to read about previous events. However, I think the author over the course of the series has slipped in flash backs. So, I didn’t really feel like a learned a whole lot.
There were times in this story were I felt like past events were forced in to fit a puzzle already complete.
SPOILER
I’m not sure I liked that Gin and Owen met before. I read so much, but I thought a previous book already had them meet before the “first” time. And then, Rosslyn, I could have sworn that Gin met her for the first time in the first or second book. Now we are to believe she met her before. So what was that meeting her at her club with Finn in the earlier books all about? Again, maybe I’m wrong. I do read a lot. I could be confused.
Anywho, the story kept my interest and for that, I gave it 4 hearts.
Audio Review
Lauren Fortgang is stellar. She really brings Gin and all the characters to life.
My book boyfriend Owen. 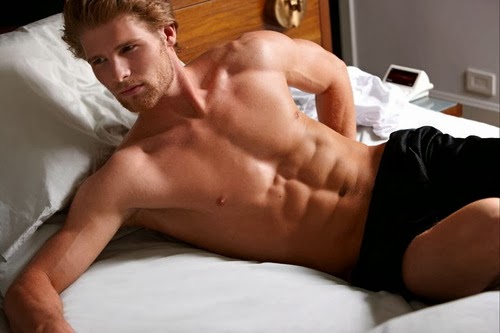 *Disclaimer - I am not the owner of this picture. I found it on the web for causal fun use on my blog for which I receive no compensation. If this picture belongs to you (you are the copyright owner) please let me know and I will remove it.
Posted by My Book Boyfriend at 4:59 AM