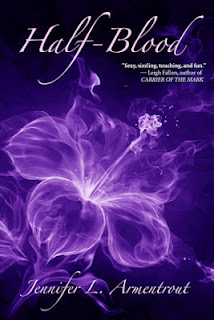 Half-Blood by Jennifer L. Armentrout
a young adult urban fantasy novel (rate PG-13)
4 out of 5 stars
Book Summary
The Hematoi descend from the unions of gods and mortals, and the children of two Hematoi-pure-bloods-have godlike powers. Children of Hematoi and mortals-well, not so much. Half-bloods only have two options: become trained Sentinels who hunt and kill daimons or become servants in the homes of the pures. Seventeen-year-old Alexandria would rather risk her life fighting than waste it scrubbing toilets, but she may end up slumming it anyway. There are several rules that students at the Covenant must follow. Alex has problems with them all, but especially rule #1:Relationships between pures and halfs are forbidden. Unfortunately, she's crushing hard on the totally hot pure-blood Aiden. But falling for Aiden isn't her biggest problem--staying alive long enough to graduate the Covenant and become a Sentinel is. If she fails in her duty, she faces a future worse than death or slavery: being turned into a daimon, and being hunted by Aiden. And that would kind of suck.
My Review
In the beginning, this book read so much like another book it almost felt like disguised plagiarism.  Yes, the characters aren’t named the same.  Yes, they are demi-gods and not vampires but the similarities are too much to ignore.  Don't get me wrong.  This book was a very enjoyable read.
However, the knowledge of the similarities didn't hinder my overwhelming need to continue to read.  Was it because I needed more of that other series and this was the closest I could get, maybe?  I have to say that she used the backbone of the other story well to build her own.  The more the story went on, the more it became its own story and not a copy of the other popular series.
The Strigoi, I mean Daimons were very predictable and read much like vampires even though they aren’t???  The whole story was kind of predictable, but that didn’t stop my curiosity to read straight through in one sitting.  That’s saying a lot especially when this is the second time for me with this same author that I’ve done this. (reading straight through, two for two) (not including Daimon short story).
Thankfully, most say that the story pulls away from the other one in the next book.  So I’m excited to move on.  Rose, no Alex is a solid character.  And of course I love Dimitri, no I mean Aiden, lol.  (Deacon = Adrian) and I could go on.  But I’m not.
Overall, the author did a wonderful job in building Greek mythology onto a solid plotline.  I will be reading more and despite my teasing, I did enjoy the book a lot.

Please ignore my joking. I had fun with my review. But once again, I did like this book a lot and would recommend. Just know going in that there are strong similarities, but those will slowly fade away.

My book boyfriend is Aiden.

Posted by My Book Boyfriend at 4:47 AM