A Hunger Like No Other (Immortals After Dark, #2) by Kresley Cole 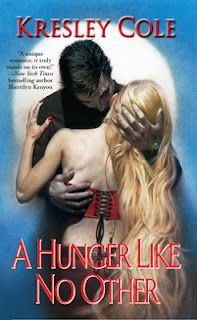 A Hunger Like No Other by Kresley Cole
An adult paranormal romance novel.  Rated NC-17 for the sexiness of it all.
4 out of 5 stars
Book Summary
Acclaimed author Kresley Cole introduces a sizzling new series with this tale of a fierce werewolf and a bewitching vampire -- unlikely soul mates whose passion will test the boundaries of life and death.

A mythic warrior who'll stop at nothing to possess her . . .

After enduring years of torture from the vampire horde, Lachlain MacRieve, leader of the Lykae Clan, is enraged to find the predestined mate he's waited millennia for is a vampire. Or partly one. This Emmaline is a small, ethereal half Valkyrie/half vampire, who somehow begins to soothe the fury burning within him.

A vampire captured by her wildest fantasy . . .

Sheltered Emmaline Troy finally sets out to uncover the truth about her deceased parents -- until a powerful Lykae claims her as his mate and forces her back to his ancestral Scottish castle. There, her fear of the Lykae -- and their notorious dark desires -- ebbs as he begins a slow, wicked seduction to sate her own dark cravings.

Yet when an ancient evil from her past resurfaces, will their desire deepen into a love that can bring a proud warrior to his knees and turn a gentle beauty into the fighter she was born to be?

My Review
Karen Marie Moning's (KMM) 1999 debut series Highlander in my opinion could be the inspiration for this story. This novel by  Kresley Cole (KC) was released in 2006. The similarities are too striking not to mention.
We start with a type of Scottish Highland warrior not all the way human born a time long long ago.  To that  you add a virginal damsel, fiery or not and you have the beginnings of a Highlander series not to mention this book.  KC adds a dash more traditional paranormal of vampires and werewolves to it with KMM’s fae additive and WaLa, you have all the elements to this story.
I don’t want to take away for KC.  So I will mention that although the backbone of the story reminds me very much of KMM’s books, I can’t say for sure KMM came up this mix of ideas herself.  But since the Highlander series is popular, it seems important to mention.
Furthermore, KC built a paranormal world like no other. Her Lykae are her werewolves, the Vampires have new rules I haven’t seen before, and the Valkyrie are her fae with a truly unique history behind them. All of which over shadows some of the other cheesy lines early in the book and take away from this whole over used virginal existence romance writers feel the need to fill their pages with.

So after a lot of eye rolling early in the book between the writing and getting used to the narrator of the audio books “female” voice, I did come to like this book quite a bit and mostly because of the author’s mythology. The romance plot line of the story was a tab bit predicable, but it was an interesting read to get us to the satisfying HEA (happily ever after).

Overall, a solid read and I would recommend it to those who love romance novels.

Robert Petkoff does a really good job with this book. At first when he did the female part, I didn’t like it. It sounded forced. But by the end, I enjoyed all his voices. He does an awesome job with the Scottish, Russian, and other various accents. Great job!
My book boyfriend, Lachlain. 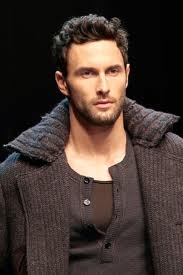