Sweet Blood of Mine by John Corwin Blog Tour + An Interview & GIVEAWAY! 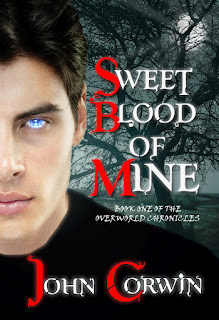 Sweet Blood of Mine ~ John Corwin

From Mega Nerd to Super Stud.

Justin Case and women do not mix. Man boobs, a love of Kings and Castles, and being tight with the "nerd" crowd certainly don't win him any points either. After rescuing Katie, his crush, it turns out she might not be the girl he thought she was, while Elyssa, the school's Goth Girl, turns out to be more. Can high school get any more confusing?

Determined to improve himself, he joins a gym and meets a sexy girl that just oozes a "come hither, Justin" vibe. Until she attacks him in the parking lot, and Justin realizes she's no ordinary girl but a being with supernatural speed and strength. After a narrow escape and an excruciating migraine headache, he wakes up with supernatural abilities all his own: speed, strength, and the ability to seduce every woman he sees.

While that might sound like the perfect combo for any hormonal teen, Justin is a hopeless romantic who wants his first time to be special. Is that too much to ask for? But he doesn't know what he is or how to stop his carnal urges. One thing is clear: If he doesn't find answers there are other more sinister supernaturals who would like nothing better than to make him their eternal plaything and do far worse than kill him.

I received an advance copy from the author for the purposes of review.


I’ve read several good books from indie authors and I’m always surprised by the talent that is untapped by traditional publishers.  But there are a select few that I consider great.  This book is one of those.  I was pleasantly surprised by just how good this book really was.


There is wit, with some grit.  There is sass with a sprinkle of sexy.  This is another book I’ve read about a supernatural creature not seen much in young adult paranormal fiction.  I can’t tell you what my darling Justin is as it is a surprise that should be revealed in the reading.


Needless to say, the author does an amazing job at writing and developing his characters.  It’s not often I read male characters written by male authors, although I do have several in my favorite author list.  But often times, I read female writers.  So this book was certainly a treat.  Justin is a true “guy” in the authentic way I think only a “guy” writer can achieve.  Yet, this book pulls on the heart strings the way many women writers know how.    Add to that a heavy dose of sarcasm, and you have the makings for a best seller.


So do I recommend, heck yes.  Full heartedly.  This will be one of the books I run around and recommend to all my book lover friends.  DON'T stop with my likeness with Justin.  Following it is a character interview with Justin.


My book boyfriend is Justin.  And for my followers who look forward to my choices, I chose guys that fit the profile of the character based on the story.  This guys is cute and maybe not as hot as some of my other choices.  But read the book and I think you will agree with my selection.


[This is Miley Morgan, chief editor and reporter extraordinaire for the Edenfield High Illuminator newspaper.  I've been investigating Justin Case for the past few weeks, trying to figure out how in the world such a nerdy loser has become one of the studliestguys in the school.  You wouldn't believe the bizarre things that I've seen just from camping outside his house every night with a pair of night-vision binoculars, not to mention the very strange company he keeps.  I see him coming out of his house now.  Time for some answers.  I charge from the bushes, notepad in hand.]


Justin:  [Leaps about a foot in the air (obviously nervous to be confronted by a real reporter).] Good lord, girl, you just scared the crap out of me.  [Looks around furtively]  Ugh!  I just realized it's you I smell, not my garbage can.


Me:  Why are you so nervous?  Is it because you're facing the Truthinator?


Justin:  The what?  [Rolls his eyes.]  Oh, I dunno, maybe because a female who looks filthy enough to have been raised by wild chipmunks just burst out of the hedges?


Me:  I've been watching you, Justin.  Did you know you've gone from mega nerd to super stud quite literally in only a few weeks?


Justin:  No, but that sounds like a cool blurb for a book—


Me:  Get serious!  I'm the chief editor and lead reporter for the school newspaper and I won't hesitate to expose you.


Justin:  We have a school newspaper?  [Scratches his head.]


Me:  You've had some strange visitors to your house lately.


Justin:  Uh, so you've seen the cute blonde who's been terrorizing me?  Likes pink and purrs?


Me:  As a matter of fact, I saw her here the other day watching your house.


Me:  I've also seen her running incredibly fast for a human.  I might even call it paranormal.  But that doesn't compare to what you did to that poor woman at the grocery store, or when you molested that waitress at the Chinese restaurant—


Me:  There's no sense hiding the truth from me, Justin.  Two weeks ago you were chubby and out of shape, not to mention a complete loser with girls.  Now you suddenly have sexual super powers?


Justin:  [Hangs his head and sighs. (I have him!)] Yeah, I'd almost be willing to have my man boobs back instead of being stalked by crazy vampire chicks—


Me:  Did you just say vampires?


Justin:  You said you wanted the truth, right?  [Grabs my shirt and gets a crazy look in his eyes.]  I thought it'd be a great idea to work out, you know, graduate from that B-cup manzier and XL pants to something slimmer.  Then this super-hot blonde girl comes on to me at the gym and freaking attacks me in the parking lot!  Her eyes were all like [He widens his eyes and rolls them around. (I'm certain he's losing his mind.)]  And then she slams me up against a car and grabbed my—


Me:  Most guys wouldn't complain about that!


Justin:  I knew I should've stuck with Kings and Castles.  Life was so much simpler as a level twelve Woodland Elf, running around and beating the crap out of nerds with foam swords.  [He sighs.]  And I guess you know about the sexual super powers.


Me:  I've seen how women react around you.  What are you using on these poor girls?  Spanish flies?  Chinese herbs?Godiva chocolate syrup?


Justin:  [Shakes his head.]  I don't know what it is.  You already know about the woman in the meat department and the waitress, but my female gym trainer almost deflowered me!  [He sits on his front steps with a sad puppy-dog face (obviously a ploy to elicit sympathy).]  But none of that matters.


Me:  Wait a minute.  You're a dude, a virgin no less, with sexual super powers and you're not taking advantage of them?


Justin:  There's only one girl I want.  And she hates me.


Me:  Are you talking about that Goth girl?  Gross!  She's got enough piercings to construct a life-sized version of the Eifel Tower.


Justin:  No, that's not the real her.  You wouldn't understand.  Beneath all that makeup hides a beautiful woman.


Me:  [At this point I can tell he's in la-la land just thinking about her.  How pathetic.]  Just use your powers on her.


Me:  If I didn't know any better, I'd think you were a Princess Bride fan.


Me:  You're obviously a hopeless romantic and a wimp, so I have to ask:  Team Edward or Team Jacob?


Justin:  [His forehead scrunches up like he's thinking too hard.]  Did you really just ask me about Twilight?  [Shrugs.]  Team Harry Potter all the way.


Me:  Answer avoidance.  I see how it is.  The correct answer would have been Team Hunger Games.


Justin:  [Face-palms.  (Obviously upset that he failed my litmus test.)]


[As I walk away from this sad young man, I can't help wonder if his troubles are only just beginning.  On the other hand, I realize it's time to investigate some of the other strange people in his life, starting with that Goth girl.  Stay tuned, folks!  I'll break this story and rock the school with a bigger scandal than the time they almost suspended a football player for trying to kiss Katie Johnson.]
AND NOW for the GIVEAWAY!  Do you want to read this great book!  Enter below.

a Rafflecopter giveaway
Posted by My Book Boyfriend at 12:00 AM