Bite Me (A Love Story #3) by Christopher Moore 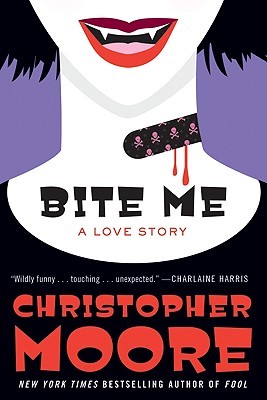 The city of San Francisco is being stalked by a huge shaved vampyre cat named Chet, and only I, Abby Normal, emergency backup mistress of the Greater Bay Area night, and my manga-haired love monkey, Foo Dog, stand between the ravenous monster and a bloody massacre of the general public.

Whoa. And this is a love story? Yup. 'Cept there's no whining. See, while some lovers were born to run, Jody and Tommy were born to bite. Well, reborn, that is, now that they're vampires. Good thing theirs is an undying love, since their Goth Girl Friday, Abby Normal, imprisoned them in a bronze statue.

Abby wants to be a bloodsucking fiend, too, but right now she's really busy with other stuff, like breaking in a pair of red vinyl thigh-high Skankenstein(R) platform boots and wrangling her Ph.D.-candidate boyfriend, Steve (the love monkey). And then there's that vampire cat Chet, who's getting bigger and smarter--and thirstier--by the minute. Abby thought she and Steve could handle the kitty cat on their own, "mais non" . . .

Before you can say "OMG WTF?" Tommy and Jody are sprung from captivity, and join forces with Abby, Steve, the frozen-turkey-bowling Safeway crew, the Emperor of San Francisco and his trusty dogs Lazarus and Bummer, Abby's gay Goth friend Jared, and SF's finest Cavuto and Rivera to hunt big cat and save the city. And that's when the fun really begins..


First let’s start with the good. This book is laugh out loud funny. Maybe not as much as the first book, yet still it is funny. The silliness continues and makes this book a light read and pure entertainment.
Now, the bad. I wasn’t happy with the beginning, but I won’t say why (non- spoilery and all). I was even more upset with the end. This series is a LOVE STORY. And unfortunately, it doesn’t fill the name. I was quite surprised by the end despite the ending of the last book. I just assumed. But you know what they say about assume. It makes an ass out of u and me. Anyway….


I was even more disturbed by the pairings. Ugh.
Audio Review


Susan Bennett continued to carry this series. She’s an amazing narrator and actress. She pulled off voices keeping everyone with differences with ease.
Overall, even though the ending to the series sucked eggs, I still think it’s worth a read.


My book boyfriend is Tommy.