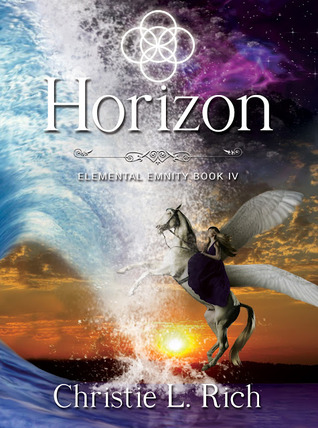 Horizon (Elemental Enmity #4) ~ Christie Rich
This is a New Adult paranormal romance novel (Rated R)
♥♥♥♥1/2
(Four and a half Fae'astic Hearts)
Book Summary
Evil has many faces—unfortunately, Rayla Tate has seen them all, or so she thinks. Since she learned she was an Elemental, she has been hunted for her power. But Rayla hasn’t met her greatest foe; she hasn’t seen true evil…yet.

Rayla betrayed her bondmate to be with the man she loves. Now that she has Heath at her side, she is ready to face the fae council and move on with her life. Too bad Zach has other ideas. He’s not about to give Rayla up just because his sister got in the way. He will find Rayla and prove to her that he is the man she is meant to be with, even if he has to face the monsters of the dark realms to do it.

Despite her growing feelings for Heath, with every passing day her body gives in to her bond with Zach. Rayla must leave the dark realms or risk losing control of her mind and ultimately her power. Once back in Lombarda, she discovers a secret about her origins that could shake the foundations of the world, both fae and human. There is more at stake than who she is bound to. The Order and the fae both want control of the same thing, and this time it is not her.

Rayla must unite with unlikely allies to destroy the evil plaguing Faeresia. For if she refuses, she will succumb to a compulsion she never could have anticipated and plunge the world and those she loves into darkness or utter oblivion.
My Review
This series has come a long way from the first book I read and ranted about. It just goes to show if you see promise in a series not to give up after book one. This series just kept getting better and better. There was just so much goodness going on. And not just the luscious hot guys.
I really liked that Rayla was fighter even if she was ill prepared. She doesn't give up hope and didn’t back down. All great qualities for a kick butt female lead.
And the guys, all five of them each stole my heart along the journey. As much as I liked Heath, Zach has been my heart since book one. And I just really love him, lol.
But this series wraps up rather nicely and even leaves us room for growth in a spin off series. So we will see if the author takes that directions. YAY, okay… back to the review.
Sometimes it's not the light of the sun that will set the sky on fire, sometimes it's within you. Rayla is that girl and her task may seem hopeless, but she is determined to see it through.
If you haven’t read this series, it starts off with book one Five. Check it out.
My book boyfriend Zach.