Undressed (The Manhattanites #1) by Avery Aster 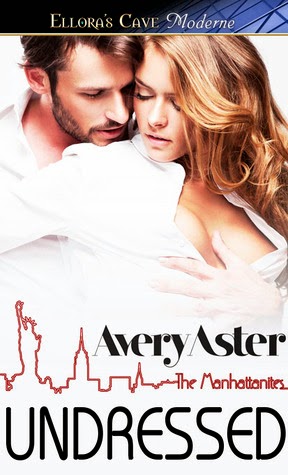 Book 1 in The Manhattanites series.

Milan’s notorious playboy, Prince Tittoni, seems to have everything—Lamborghinis, exotic women, palaces throughout Europe and business success. Ramping up his fabric company to go global with a new apparel brand, he ruthlessly stops supplying fabrics to the American client who inspired the collection. But once they meet, what’s he willing to give to get her in his bed?

Lex’s Louboutins are dug in deep to win this war. All’s fair in love and fashion!

Inside Scoop: Though the hero and heroine remain monogamous, their Prada-wearing friends indulge in a ménage a trois and other fashionable sexual fun and games.
My Review
If you are looking for a light read with a for sure HEA this book maybe for you. There is some humor and certainly a bit of angst.
For me, this book was a cluster fuck. So let me explain…
SPOILERS
First, I was annoyed by all the name dropping. While I think a fashionista would know or talk about others in the fashion world, I thought it was a bit unbelievable that a designer would wear other designers on the red carpet or even outside of that environment and name drop. REALLY. Why would you advertise your competition? She didn’t make shoes, so I can forgive that except when she is wearing shoes designed by her clothing competition like Tory Burch.
Second, I didn’t like that she incorporated real people in her book and made them interact with her fictional characters to the point of giving them personality. Is that legal?
Third, the angst. Massimo is about to shag her, to the point of near penetration. And offhandedly she mentions she’s not used to the causal shag. Mind you, she said she was okay with the causal. His reaction is to put his package back in his pants and zip up. REALLY. Not likely. (Anything is possible, but you have to sell me on it. I wasn’t sold.) I could site more examples but I won’t. I will say there was one weird and totally unbelievable sex scene in the book. Anyway…
Fourth, she has around a week or a little more to produce her clothes for her runway event. And she spends most of that time designing and sewing Massimo’s collection and promoting it. I get she partnered with him. The whole point of the partnership was to get the fabric she needed for her collection. But if she doesn’t make the runway and doesn’t sell because it’s a half ass job given the time constraints, what was the point of the partnership.
Fifth, they are engaged in a little over a week time. Not impossible, but they didn’t really get to know each other well enough to be “in love” in my book.
Overall, it’s just too farfetched for me. I couldn’t enjoy it because it didn’t ring true on any level. Too much time was spent name dropping and not character or plot developing.
I have book two. And that was the book I was requested to read. So I will read it, eventually.
My book boyfriend Massimo.