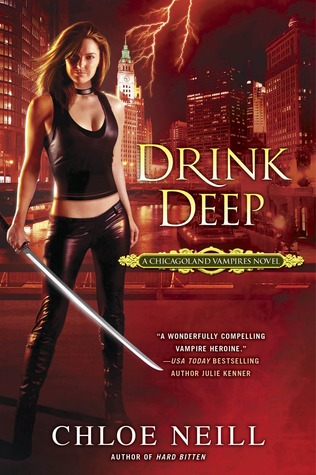 Drink Deep (Chicagoland Vampires #5) by Chloe Neill
This is an adult urban fantasy novel (Rated R)
♥♥1/2
(Two and a half flatlined hearts)
Book Summary
Clouds are brewing over Cadogan House, and Merit the vampire can't tell if this is the darkness before the dawn, or the calm before the storm. With the city itself in turmoil over paranormals and the state threatening to pass a paranormal registration act, times have never been more precarious for the vampires. If only they could lay low for a bit...

Then magic rears its ugly head when Lake Michigan turns black. The mayor insists it's nothing to worry about, but Merit knows a panic is coming. She'll have to turn to friends old and new to find out who's behind this, and stop them before it's too late for both the vampires and humans.
My Review
How I loathe this series let me count the ways.  I’m not sure why I bothered to read or rather listen to this one.  Oh, Oh, I know, it was on sale at audible for 6.95 and I did want to know what happen to Ethan.  I think I could have done without.
The plotline stank to high hell.  SPOILER ALERT -à
First of all who died and made Merit leader.  No one.  Yet she noses into business that has nothing to do with her.  Sorry, I’m going to have to agree with Frank on this one, even though I dislike the guy.  There really wasn’t a reason for her involvement.    I found that nothing that was happening was a threat to anyone.  The author didn’t sell that.
There are three vampire houses out of twelve in Chicago.  I’m still pondering this one.  Are there four in New York and Sin City because I would think Vampire’s creatures of the night would prefer a city like those?  The author just hasn’t sold me on that fact either.  (Hell, I accept Anita in St. Louis but this seems odd.  There is just no good reason for it.)  Anyway, back on track.  There are three vampire houses, none of which Merit is the leader.  None of them have asked her to investigate, but there she goes.
Then, while investigating she ignores Simon’s shifty suspicious behavior in favor of interviewing other supernaturals who have done nothing????  Oh well (Merit thinks to herself), Simon looks nervous when I ask him what’s going on.  But I’ll file that away.  And she’s supposed to be smart.  And by the end, we still know nothing about Simon.  WTF!  He like disappeared off the face of the book pages.
Okay, this one took the cake for me.  Johan is like what, a vampire several tens or hundreds of years older than Merit.  In the face of trouble at some point, he is unsure of himself and needs a pep talk from Merit.  Come on???
And the resurrection, I just won’t even go there.  Not sure why death was important in the first place.  Second this is an adult book and we got snot for their reunion.  The first book in the series she gives us shock value with overseeing a sex scene with Ethan and another woman.  He’s died and come back and we get squat.
Three stars is generous.  I’m thinking two and half only because the writing technically is stellar.  The problem with this series is the romance or lack there of.  This author doesn’t know how to create a balance.  An urban fantasy doesn’t have to have romance.  In fact, this series would be a lot better without it.  This author creates tension like dangling a cookie in front of a small child and snatching it back whenever the child reaches for it.  When the child finally gets the cookie and put it to its mouth, she snacks it away and crumbles it.  In this book, she took the crumbs and tried to recreate the cookie in the final chapter.
Patricia Briggs does a better job at urban fantasy with light romance.  It may be barely there in the first books, but you don’t miss it.  This series, the romance is frustrating.  If I were a guy I’d have blue balls by this romance.

An because Chole Neill doesn't do romance at least not well, why in high heaven is every man she meets in the book good looking.  And I mean everyone one including Tate.  I don't think I heard her say once that any man wasn't impossible good looking. UGH!
Audio Review
Cynthia Holloway was the narrator.  Unfortunately, I’ve listened to a lot of books by this narrator.  And most notably, she does the Morganville Series.  So not paying attention, I would think I was hearing Myrnin.  I’m pretty sure she’s narrated a couple of other popular books I’ve listen too.  Anyway, it was okay overall.
Anyway, I can’t recommend this series.  There is a lot of wasted potential.
My Book Boyfriend, poor Jonah. 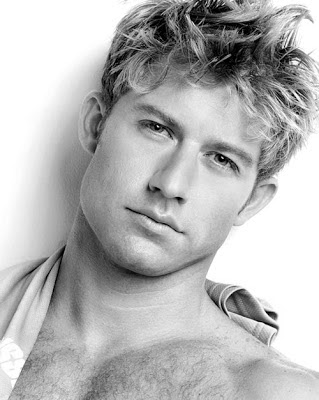