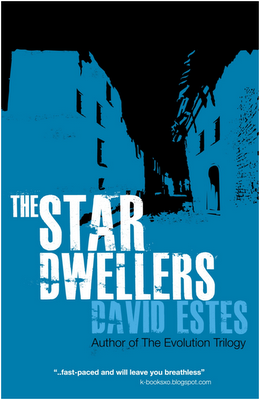 On this tour stop, I bring you an excerpt from the book.
Review to come later but 5 stars from me.
EXCERPT

Excerpt taken from Chapter One of The Star Dwellers.

The thunder of marching boots sends shivers through the rock and through my bones.

When I was young my parents used to tell me stories about monsters that roam the underground world we live in. Serpents with glowing eyes the size of dinner plates, longer than ten houses, slithering and slipping through the underground rivers and lakes. Faceless boogeymen, walking the caves, searching, searching…for a child to snack on. I now know my parents were just trying to scare me into not going out alone at night, to trick me into not wandering the outskirts of the subchapter.

These days there are worse things than monsters in the Tri-Realms.

Tawni and I hold our breath as the convoy of sun dweller troops pass us. When we heard them, we managed to extinguish our lights, pull back into our tunnel, and duck behind a finger of rock jutting out from the wall. We’re lucky—they’re not in our tunnel. Instead, they’re passing perpendicular to us, through a tunnel that intersects ours, shooting off to the left and right, the first crossroads we’ve seen since leaving the Moon Realm. Thankfully, they don’t seem to understand the concept of stealth, or they might have seen us before we even knew they were there.

It’s weird: even though he’s nothing like them, the sun dweller soldiers remind me of Tristan. I guess because they’re from the same place. The Sun Realm. A place I’ve only seen on the telebox. A place I will probably never go.

Compared to the ragtag legion of star dwellers we saw back in the Moon Realm, the sun dwellers are polished and professional, with pristine red uniforms adorned with medals and ribbons and the symbol of the Sun Realm on the shoulder—a fiery sun with scorching heat marks extending from the edges. Their weapons are shiny and new, their swords gleaming in their scabbards, their guns black and unmarked. They have bright flashlights and headlamps, which make it easy for us to see them. If one of them aims a light in our direction, they will spot us.

My muscles are tense, as line after line of soldiers march past. Without counting, I know there are more of them than the star dwellers in subchapter 26. If they were to fight, it would be a massacre. But they don’t turn at our tunnel, don’t head for subchapter 26. They pass straight through the crossroads, moving somewhere else—I don’t know where.

Some of them speak. “Damn endless tunnel,” one of them says.

“Damn the star dwellers for their rebellion,” another replies.

“I’ve got to take a piss,” the first one says, breaking off from the pack. He heads right for us, the light on his helmet bobbing and bouncing off the rock walls.

“Shut your pie-hole!” the small-bladdered soldier says, but reaches up and switches off his light, thrusting him into shadow.

I feel Tawni grab my hand as the guy’s boots scrape closer. We can hear his breathing, heavy and loud from his long march. I am coiled as tight as a spring, ready to shove my foot into his groin, or my finger into his eye, if he stumbles on our bent legs.

He stops, and I know he is close, practically right on top of us. Cloth scuffles as he gets his thing out. We hear the soft shhhhh of moisture as he pees right next to us. It splatters on the rocks, spraying tiny droplets of liquid waste on my leg. Tawni is even closer so she gets the worst of it.

He is so exposed I could hurt him badly in an instant. As much as I want to, it would be suicide. The rest of the soldiers would be on us before I could say Pee somewhere else, sucker!

I resist the temptation, trying not to throw up as the tangy scent of urine fills my nostrils.

He finishes, scuffles his clothing some more, scrapes his boots away. I breathe out slowly, and I hear Tawni do the same. The guy flicks his light on and reunites with the other men just as the last line passes through the intersection. Darkness is restored as the torches disappear into the outgoing tunnel. The thunder fades away.

We don’t speak for a half hour, barely move, barely breathe. It could be the first of a dozen convoys for all we know. I feel that if we stumble into the crossroads, a bunch of lights will come on, a net will be thrown over us, and we’ll be dragged away.

My legs are aching from lack of movement. I feel like screaming. I am trying to outlast Tawni, but what she lacks in toughness, she makes up for in patience. I can’t take it anymore.

“You smell nasty,” I whisper.

“Speak for yourself,” she hisses.

“That was really gross.”

“True.” Silence for another minute. Then I say, “Do you think it’s safe?”

“Neither do I, but I don’t think I can sit in a puddle of urine any longer.”

“I mean, I’m sure there’s some spa in the Sun Realm that claims urine has healing powers, or is good for the skin, or something, and offers urine baths and urine scrubs, but I just don’t buy it.”

Tawni snorts. “You’re nuts,” she says. “Thank God for the modesty of the sun dwellers.”

“Yeah, we were lucky. If they were like the guys in the Moon Realm I know, the whole platoon would’ve peed against the wall, lights blazing full force.”

I pull myself to my feet and help Tawni to hers. We don’t turn our lights on, opting to feel our way along the wall to the intersection. When the rough rock gives way to empty air, we know we’ve reached the crossroads. Tawni holds my hand and pulls me across the mouth of the intersecting tunnel. A bead of sweat leaves a salty trail on my forehead as my anxiety reaches a fever pitch.

No lights come on. No net falls on us. No one drags us away. Not yet.


THIS BOOK IS AVAILABLE.  If you enjoy dystopian books, you will most certianly enjoy this one.  Grab it and the first if you haven't read.  They are must reads.
About the author

David Estes was born in El Paso, Texas but moved to Pittsburgh, Pennsylvania when he was very young. He grew up in Pittsburgh and then went to Penn State for college. Eventually moved to Sydney, Australia where he met his wife. A reader all his life, he began writing novels for the children's and YA markets in 2010. He´s a writer with OCD, a love of dancing and singing (but only when no one is looking or listening), a mad-skilled ping-pong player, and prefers writing at the swimming pool to writing at a table
Author of the Evolution Trilogy
http://davidestesbooks.blogspot.com
http://www.facebook.com/pages/David-Estes/130864990343920
https://twitter.com/#!/davidestesbooks
http://www.goodreads.com/author/show/3167424.David_Estes
The Star Dwellers Synopsis:

After rescuing her father and younger sister, Adele is forced to leave her family and Tristan behind to find her mother in the cruel and dangerous realm of the star dwellers.

Amidst blossoming feelings for Adele, Tristan must cast his feelings aside and let her find her own way amongst the star dwellers, while he accompanies Adele's father to meet with the leaders of the moon dwellers and decide the fate of the Tri-Realms.

Will Adele be able to rescue her mother and make it back to the Moon Realm before the President and the sun dweller soldiers destroy her family?

Can Tristan convince the moon dweller puppets of the error of their ways?

Was Adele's lost kiss with Tristan her one and only chance at love?

In her world there's only one rule: Someone must die