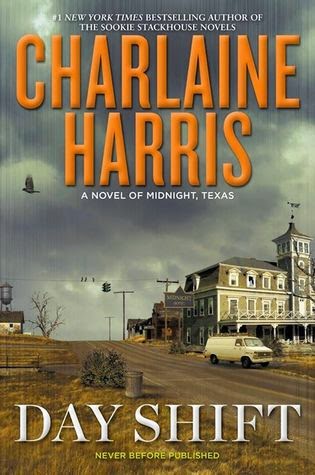 Day Shift (Midnight, Texas #2) by Charlaine Harris
This is an adult paranormal fantasy novel (Rated PG-13)
♥♥1/2
(Two and a Half Day Shift Hearts)
Book Summary
In Midnight Crossroad, Charlaine Harris “capture[d] the same magic as the world of Bon Temps, Louisiana, and [took] it to another level" (Houston Press). Now the #1 New York Times bestselling author of the Sookie Stackhouse novels returns to the one-traffic-light town you see only when you’re on the way to someplace else…

There is no such thing as bad publicity, except in Midnight, Texas, where the residents like to keep to themselves. Even in a town full of secretive people, Olivia Charity is an enigma. She lives with the vampire Lemuel, but no one knows what she does; they only know that she’s beautiful and dangerous.

Psychic Manfred Bernardo finds out just how dangerous when he goes on a working weekend to Dallas and sees Olivia there with a couple who are both found dead the next day. To make matters worse, one of Manfred’s regular—and very wealthy—clients dies during a reading.

Manfred returns from Dallas embroiled in scandal and hounded by the press. He turns to Olivia for help; somehow he knows that the mysterious Olivia can get things back to normal. As normal as things get in Midnight…
My Review
I don’t need romance to enjoy a story. If you follow me, you’ve heard me say this a million times. So when Ms. Harris put this series out which is so far different from the True Blood series, it bothered me none. This series is closer to her Harper Connelly series excluding the romance. And Manfred whom I think of as the main character comes from that series.
I haven’t read the authors other series, but my understanding is that characters in this book come from all her series. And for this book, it includes two True Book characters that show up. Exciting, yes. But other than that, this book just fizzles.


I hoped for more and got less. I really enjoyed the first book and was looking for the story to continue from where it left off. And the author just skipped over the developments at the end of the previous story as if they didn’t happen.
From the mystery that really didn’t keep me on the edge of my seat or guessing from my point to the almost no character development. The only saving grace is we get some answers about some of our resident Midnighters. I was shocked, well, shocked is a strong word. I was surprised by one and not the other.
I hope that this series gets better. And we don’t need romance. However, don’t promise romance at the end of one book and totally ignore it in the next.
This book lacked luster and almost felt like the writer was forced to write it and not that she felt any passion for the story. I’m still intrigued by this series and will read the next one. If that one doesn’t pan out, I’ll have to give up on this series.
SPOILERS
Can I just say Manfred is a twenty something hot guy as described by the Harper Connelly series. He’s tat’d up and sexy. BoBo is a hot thirties-something guy. Both guys never get laid or look for hook ups. I find that highly unlikely. Guys think about sex way too much and as friends, they never suggest going to the neighboring town to a bar. I understand the author wants to distance herself from the Sookie Stakehouse series, but she can’t do that at the expense of character believability. She could fade to black with the guys hooking up with other people. But to suggest these guys have gone months without getting any and there would be girls lined up to give up, is beyond ridiculous and unbelievable.
END OF SPOILERS 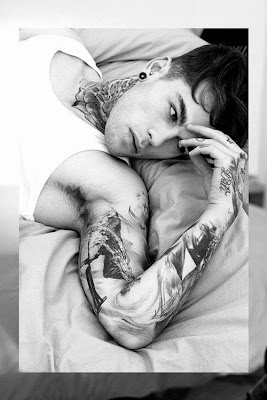 *Disclaimer - I am not the owner of this picture. I found it on the web for causal fun use on my blog for which I receive no compensation. If this picture belongs to you (you are the copyright owner) please let me know and I will remove it.
Posted by My Book Boyfriend at 5:42 AM