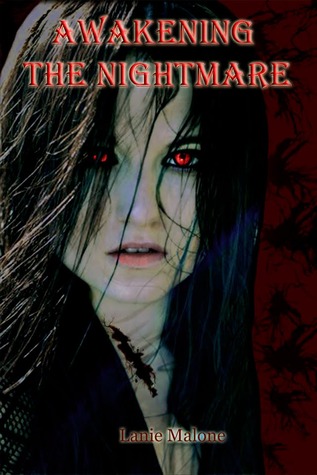 In a world filled with preternatural beings, Corinne DeLacy stands alone. For centuries she has hidden her heritage and powers from the rest of the world. Then Nick is forced into her life, turning it upside down. Standing in her way at every turn, he watches her suspiciously. Circumstances landed them together and now they must fight to save all that they hold dear.

This book contains content considered unsuitable for young readers 17 and under, and which may be offensive to some readers of all ages.

Ignore the cover. It looks like the beginning of a horror novel with lots of blood and gore, but really it’s a paranormal adventure. It has action but doesn’t hold back on the romance. It has an interesting twist all the same.

This book came with high praise from a friend of mine, Alana, so I had to check it out. We tend to like the same kind of books, so I was eager for the opportunity to read. Sucked in by the mystery of it all, I had lots of theories, but they all fell short of the actual outcome.

Is that good, yes. I liked the dynamics between Cory and her main guy. Things didn’t go as one would expect, but they went where they should go. My small complaint that in light of all the events that went on in the story it almost felt like ‘insta love’. But in actuality enough time passed.
I’m looking forward to the next in the series. You all should check this one out.

I have awesome opportunity to share an excerpt with you.

Hoping that a bath might help soothe her, Cory started running her water and added an excessive amount of bubble bath, she hated running out of bubbles too soon. She stripped off her bloody clothes and threw them in the trash; there would be no saving those. After laying out a towel, she climbed in and bathed. When she was all clean she leaned her head back and relaxed, letting the hot water soothe her aching muscles and her unsettled thoughts.

She was sitting neck deep in heaven with her eyes closed when she heard someone approaching the bathroom door. She knew who it was long before he reached the door and slammed it open. The doorknob stuck in the sheetrock wall behind the door.

“Did you need something Nick or do you just get off on destroying my home?” She said it without bothering to move or even open her eyes. She could feel the anger rolling off of him but chose to ignore it. She was growing tired of being forever at war with him. It was a war she had come to realize neither of them would ever win.

Cory rolled her eyes and sat up, crossing her arms on the side of the tub and resting her chin on them. “What would you have me do Nick? I was right. I just needed someone to back me up on it and you refused. She needs to be around people, people other than just you and your men. Keeping her locked in my apartment for all eternity is going to drive her insane.”

Nick opened his mouth to respond but Cory stood up in the tub and it felt like his jaw kept going all the way to the floor. She was just as breathtaking as he had imagined and he was instantly hard. “Good God woman, I’m not a eunuch. Don’t you have any shame at all?”

Cory laughed a little as she replied, “No actually, I don’t. And you know, it might not be such a bad life choice for you to get clipped. Then perhaps we could have a conversation every now and then, without all the blood rushing away from your brain.” At his shocked look she smiled and said, “Oh yes, I’ve noticed. You aren’t immune to me, no matter how much you dislike me. I think it’s because you know you can’t have me.”

She leaned down to retrieve her towel off the floor and when she stood up he was right in front of her, only inches away and seriously pissed off. Her breath caught in her throat as she looked up into his eyes. He was angry yes, but there was also something a thousand times more powerful in his burning eyes; desire. Cory trembled at his nearness and that long unsatisfied hunger came rushing to the forefront of her mind once again.

Nick smiled when he felt her tremble. “I’m not the only one who wants something they can’t have.” He reached up a hand and gently rubbed the back of his knuckles across her cheek. She closed her eyes and before she could stop herself she leaned into the caress. His hand reached behind her head and tilted her face up towards his own. His other hand snaked around her and pulled her close. “But who says we can’t get what we want?”

MY BOOK BOYFRIEND is Nick. (Leave a comment if you like my choice) Yes, girls. Nick is just that hot!