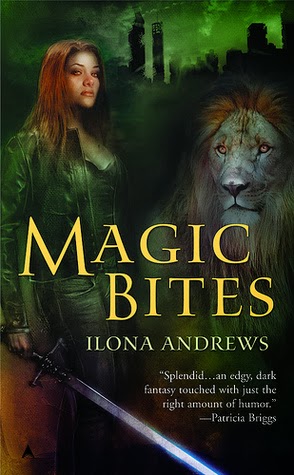 Magic Bites  (Kate Daniels #1) by Ilona Andrews
This is an adult dystopian urban fantasy novel (Rated R)
♥♥♥♥1/2
(Four and a half Hearts)
Book Summary
When the magic is up, rogue mages cast their spells and monsters appear, while guns refuse to fire and cars fail to start. But then technology returns, and the magic recedes as unpredictably as it arose, leaving all kinds of paranormal problems in its wake.

Kate Daniels is a down-on-her-luck mercenary who makes her living cleaning up these magical problems. But when Kate's guardian is murdered, her quest for justice draws her into a power struggle between two strong factions within Atlanta's magic circles.

The Masters of the Dead, necromancers who can control vampires, and the Pack, a paramilitary clan of shapechangers, blame each other for a series of bizarre killings—and the death of Kate's guardian may be part of the same mystery. Pressured by both sides to find the killer, Kate realizes she's way out of her league—but she wouldn't have it any other way…
My Review
I actually really liked this one. This series has been recommended to me by a lot of my book friends. And I have to say, I really enjoyed it. I had been warned that the world building was a bit confusing. I’m not sure if it was the warning or not, but I didn’t have trouble navigating it.
I have to say, the author’s take on paranormal elements threw me for a loop, but I enjoyed that it was something different and new.
I will say that this story reminded me a lot of pre-sex Anita Blake. You have a kick ass character who can handle her own. I will say that I like Kate Daniels more because she didn’t have Anita’s hang-ups for women’s lib. That is to say, it didn’t bother Kate to have a guy open and door or be a gentleman. She knew she was kick ass without having to prove it all the time.
It also reminded me of Anita Blake in storyline and characters. Curren to me is an earlier version of Jean-Claude and others. Derek is Anita’s Jason. And so on.
Still, I enjoyed this series and quickly moved on to the next book in the series.
Audio Review
Renee Raudman took a lot of getting used to. She sounded like a boy reading a girl. It took some getting use to, but once I did, it was fine.
For this book, my book boyfriend is Derek. 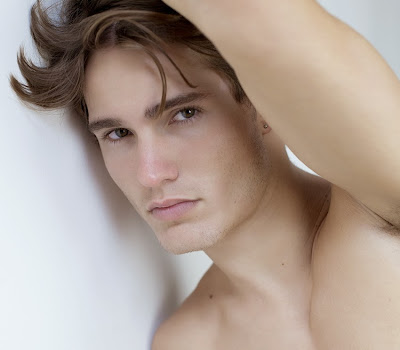 *Disclaimer - I am not the owner of this picture. I found it on the web for causal fun use on my blog for which I receive no compensation. If this picture belongs to you (you are the copyright owner) please let me know and I will remove it.
Posted by My Book Boyfriend at 8:30 PM