Fourth Grave Beneath My Feet (Charley Davidson #4) by Darynda Jones 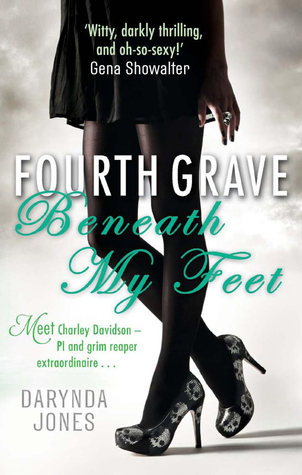 
♥♥♥♥♥
(Five Reyes Hearts)
Book Summary
Sometimes being the grim reaper really is that. Grim. And since Charley’s last case went so awry, she has taken a couple months off to wallow in the wonders of self-pity. But when a woman shows up on her doorstep convinced someone is trying to kill her, Charley has to force herself to rise above. Or at least get dressed. She quickly realizes something is amiss when everyone the woman knows swears she’s insane. The more they refute the woman’s story, the more Charley believes it.

In the meantime, the sexy, sultry son of Satan, Reyes Farrow, has been cleared of all charges. He is out of prison and out of Charley’s life, as per her wishes and several perfectly timed death threats. But his absence has put a serious crimp in her sex life. While there are other things to consider, like the fact that the city of Albuquerque has been taken hostage by an arsonist, Charley is having a difficult time staying away. Especially when it looks like Reyes may be involved. Just when life was returning to normal, Charley is thrust back into the world of crime, punishment, and the devil in blue jeans.

My Review
The mood was quite different in this story.  Where Charlie has been a tough hard nail girl, in this book we get to see her vulnerable side.  She still is tough, but even the toughest have moments of weakness.  And it is explored in this book.
But most importantly, this book is still laugh out loud funny.  It brings a certain lightness to the kill or be killed aspect of the book.  I must say, I still hold a crush on Donavon.  (*hint*hint*)  Just a message to the author in case she reads.  She’ll know what I mean.
The characters in this book/series are just so full of life.  Cookie is the absolute best and her daughter really surprised me in this book.  I have a feeling she will play an even larger role in the future.
This book was jammed pack with lots of things going on and I really enjoyed.
Audio Review
Loreiei King doesn’t disappoint again.  She’s an awesome narrator that knows how to deliver lines line a pro comedian as well as a great actress.   I hope she continues with this series.
My book boyfriend, Reyes

*Disclaimer - I am not the owner of this picture. I found it on the web for causal fun use on my blog for which I receive no compensation. If this picture belongs to you (you are the copyright owner) please let me know and I will remove it.
Posted by My Book Boyfriend at 4:03 AM