Underneath, A thriller by Michael Cargill ~ An Excerpt 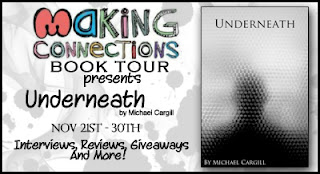 “After finishing this book, I had to sit for a while and think about how I really felt about the story presented. It does take you to another level of thinking and wondering...What does the person you are in contact with at this moment really think underneath the exterior?” K Meador


“The narration is split into two parts where you observe the main character of Hugh alongside two police officers, until ultimately the connecting segments join together in the most dramatic climax of an astonishing ending. I found the character of Hugh extremely fascinating and intriguing, as his dual personality was one that mesmerized and made me want to read on to find out more.” Lucinda


“This story is cleverly written, it's rare that you can follow a character, get inside their head, dislike them intensely and then be completely surprised by a revelation that completely explains why they are the way they are.  Hats off to Michael for his clever character portrayals.” Joanna Barker


Michael works in IT by day, and has heard the words “Yuck, I hate computers” more times than he cares to count.


Although generally a fan of thriller-suspense stories, he is also something a WWII enthusiast.  By this, he means that he likes reading about WWII; he has no desire to travel back in time, and actually be a WWII soldier.  Everything was black and white back in those days, so telling the difference between a blood stain, and a coffee stain is almost impossible.


Michael is a new author, and he published his first story in mid-2011.  Underneath is his debut novel, and he cites Stephen King, John Grisham, and James Herbert as influences.


Michael is as much a humorist as he is a novelist, and his website is chock full of hilariously irreverent and sarcastic articles.


Anyone looking to sample his work, should check out Shelter from Thunder.  It is short, and available for free on Amazon, Smashwords, and Barnes and Noble.


Interestingly, he thinks that authors should be more willing to embrace piracy.  He uploaded his own work to numerous torrent sites, and links to them are available on his website.


Where to purchase this book:

For most of the night he was friendly, charming and flirty. A couple of times, however, she thought she saw something unsettling and sinister about him. It was something she would never be able to actually explain, but it was as if she had seen another person somewhere underneath his pleasant exterior. Someone who was snarling at her. Ready to pounce. To smash her face, again and again, against the table if she didn’t give him what he wanted. Or worse.
However, it was nothing more than a glimpse that she saw out the corner of her eye, nd when she looked back it was gone. It was just Hugh sitting there, smiling and laughing as he always did. She put it down to nerves, and the fact that she was in an unfamiliar place with a man she had only met the other day; the wine was also clouding her judgement. After a while, she felt completely at ease in his company. Later on, they went to another venue that had a dance floor. He whispered in her ear that he also found the absence of her brassiere very liberating. She laughed, and playfully slapped his hands away.
They walked back to his apartment, sliding across one or two car bonnets on the way. It was late and dark when they got to the complex, so there was no-one hanging around outside, but Hugh didn’t even notice. He was too busy giving Abigail a piggy back to care about anything else. As they took the lift up to his floor, in the mirror’s reflection Abigail thought she saw that sinister look on Hugh’s face once more. Yet when she looked back, it was gone. The lift doors opened and when they stepped out, Abigail saw some straws lying on the floor of the corridor. She yelped in delight, and kicked at two that were lying right next to each other. One of them shot off across the floor, whilst the other one looped up into the air and hit her on the forehead. She screamed with laughter. Hugh couldn’t help, but smile. “Where the bloody hell did they come from?” she asked.
Posted by My Book Boyfriend at 12:00 AM