Sixth Grave on the Edge (Charley Davidson #6) by Darynda Jones 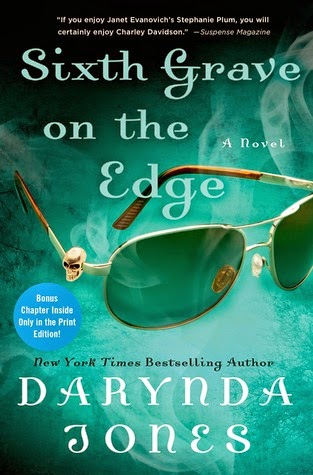 Sixth Grave on the Edge (Charley Davidson #6) by Darynda Jones
This is an adult paranormal fantasy novel (Rated NC-17)
♥♥♥♥
(Four Reyes Hearts)
Book Summary
Few things in life can come between a grim reaper and her coffee, but the sexy, sultry son of Satan is one of them. Now that Reyes Farrow has asked for her hand, Charley Davidson feels it's time to learn more about his past, but Reyes is reluctant to open up. When the official FBI file of his childhood abduction lands in her lap, Charley decides to go behind her mysterious beau’s back and conduct her own investigation. Because what could go wrong?

Unfortunately, another case has fallen into her lap—one with dangerous implications. Some very insistent men want Charley to hunt down a witness who is scheduled to testify against their boss, a major player in the local crime syndicate. If Charley doesn't come up with an address in 48 hours, the people closest to her will start to disappear.

Add to that a desperate man in search of the soul he lost in a card game, a dogged mother determined to find the ghost of her son, and a beautiful, young Deaf boy haunted by his new ability to see the departed as clearly as he sees the living, and Charley has her hands full. The fact that Reyes has caught on to her latest venture only adds fuel to the inferno that he is. Good thing for Charley she's used to multi-tasking and always up for a challenge…especially when that challenge comes in the form of Reyes Farrow.
My Reviews
Okay, so I definitely enjoyed this book more than the last. There wasn’t much of a mystery in this one as again, Charlie was trying to save the world and almost…
I won’t have spoilers. Let’s just say I wondered how things would work out after a little mishap. There were like four plots happening all at the same time each had a similar theme to another. For instance, there was the I wasn’t as bad as I thought I was theme. There was one other theme, but I don’t want to spoil it.
We get answers in this one. Thank goodness for a character who almost told Charlie everything we’ve been dying to know. But then there are still unanswered questions and a major reveal at the end which I had already figured out.

Bonus, this book we get some really LOL moments. I mean I was cracking up for two different scenes nearly in tears. It's been a few books since I laughed like that. It was great.
I’ll tell you, the Charlie and Reyes dynamic almost pissed me off. There is only so much dancing around you can do. I got to the point where I wanted Reyes to move on because it would have served Charlie right. Anywho, I’ll still gobble up this series. I really like the characters. And damnit, I want more answers, lol.
Audio Review
Lorelei King does a fabulous job as usual. She was tailor made to play Charlie and Reyes.
My book boyfriend Reyes.