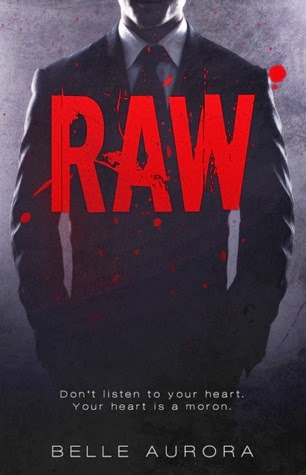 Raw by Belle Aurora
This an adult contemporary romance/erotica novel (Rated NC-17)
♥♥♥♥
(Four Twitchy Hearts)
Book Summary
***Author Note: This is not a love story. This is a story of love gone wrong.***

Growing up the way I did, you’d think I’d be more screwed up than what I actually am.

Soon as I turned sixteen, I left that bump in the road I called home and took my chances on the street.

Best decision I ever made.

Now, at the age of twenty six, I’m educated, employed and damn good at my job.

My friends have become my family. Like me, they know what it’s like to grow up unloved.

But the saying is true.

The world makes way for those who know where they are going.

I know where I’m going and I’ll get there eventually. On my own terms and at my own pace.

But then there’s him.

I feel his eyes on me. I see him hiding in plain sight. He watches me.

He makes me feel.

I’m sure you’re wondering how a person falls in love with their stalker.

This isn’t a story.

This is my life.
MY REVIEW


Okay, so I was recommended this one numerous times. It wasn’t until a particularly choosey reader friend of mine said she loved it did I give it a chance.
Recommendations can be tricky. I think when a book has so much hype, my expectation is to read a home run book. And the last two recommendations for me didn’t work out so well, Wallbanger and Seduction and Snacks. Both of those books were raved about and I just didn’t love them. And quite possibly they never stood a chance because my expectations were too high. Then again, I was recommended Fifty Shades of Grey, Beautiful Disaster and Reaper’s Property, all which turned out to be home runs.
Unfortunately, despite the intrigue of this book and the interesting plot, it fell short of a home run because of some major plot holes. And maybe other reader’s aren’t as particular as I am. However for me, If you are going to write contemporary romance, every aspect of the story should be plausible. This isn’t paranormal, dystopian or fantasy and you can’t make up your world building. And here lies the problem.
Had I truly rated this book, it would be 3.5 stars because of the technical plot holes. However, I think I gave Wallbanger and Seduction and Snacks 3 stars and this book was more than a half a star better despite the plot holes. Thus, I rounded up to 4 stars to show it falls between the books I listed above. (better say than Wallbanger but not as good as Reaper’s Property).
So what are the plot holes… SPOILERS (If you haven’t read, skip this section)
I’m going to list the ones on my mind right at this moment.
Let’s start with a minor one. Twitch goes to see another drug lord with Happy and Michael. This drug lord then allows them to come in his office outnumbered without his own back up. This would never happen. Then he allows Twitch to walk behind him making him vulnerable. Never would happen. This drug lord would have had body guards in the room, one at the very least but two to even the odd more likely. This doesn’t work. And as this event creates a larger plot event in the story, it’s has to be mentioned.
The bigger plot hole is Twitch moving to Sydney from America. While, I could understand his need to go there and find her, I didn’t understand why Julian (I think his name is, his best friend) would follow. And why would Happy. Although, I’m never quite sure where Happy came from. I understood why Ling might follow. But it just wasn’t explained why these people would uproot their lives. Added to that, Twitch is a drug dealer, who started his business in US. Why would he think he could move to Sydney and begin a drug business there with 2 other drug lords in the area. This shows the author’s obvious lack of research in the drug business if she was going to write about it. This is important to sell the story. Why is Julian/Julius? there.
One other thing that bothered me was the threesome between Happy/Dave/Nikki. Why does this bother me? Because it doesn’t make sense and wasn’t necessary. And if you know anything about me, I love threesome books with 2 guys and a girl, so that wasn’t the problem. Maybe it was my knowledge that made this hard to accept. You can’t have a threesome with 2 bottoms. Let me explain, Dave wanted nothing to do with girl parts because he’s straight up gay. So when Happy is doing Nikki, was he just sitting around? How is that a threesome? And since Dave isn’t into girls and the author said that Happy did Dave, what was Nikki doing while Happy was doing Dave if Dave wouldn’t touch her or be touched by her??? It just didn’t make sense.
Let’s not talk about that I knew Twitch ordered the assault when it first happened.
And I could talk about the end. I personally could have done without the final section if the author wasn’t going to continue with the series. And that’s all I’ll say without giving too many spoilers.
END OF SPOILERS
One other problem for me was the dual point of view. As much as I enjoy the male POV, in this case, I think it took some of the edginess of the story away and made the guy turn into a bit of a pussy with the reading of it. And I didn’t think Twitch was very different then all the “alpha” males that are in books these days.


Finally, I think even though I don’t need sex in the book. I felt two things. One was the first half of the book was sex heavy whether actual sex or tension and the second half dropped to almost nothing. Second, there is a “telling” that there was a change in the tone of sex. I wished the author would have “showed” that for more impact.
Anyway, I’m done ranting. This author could have used a better beta reader. Anyway, it was a good enough read that I don’t total regret spending $3.99. Although part of me wants my money back. But I won’t request a refund. It wasn’t bad enough for that.
My book boyfriend would probably be Michael or Happy. But I’m going with Twitch because this was his book. (This guy actually sounds like too much like a model I know, but I'm going to use a different model instead.) 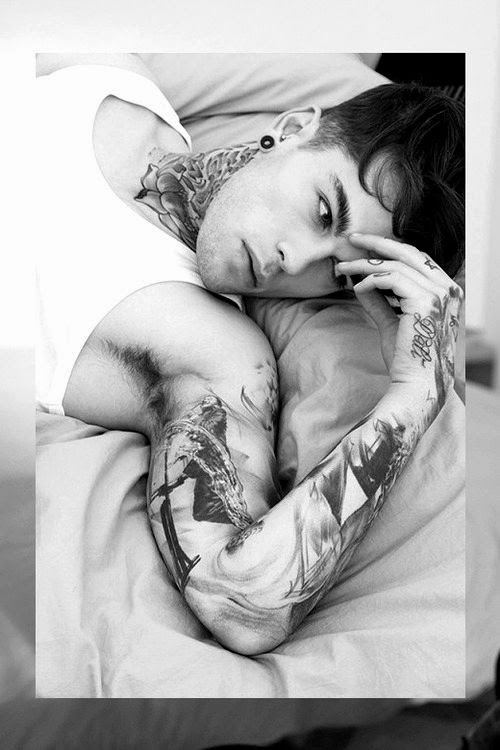 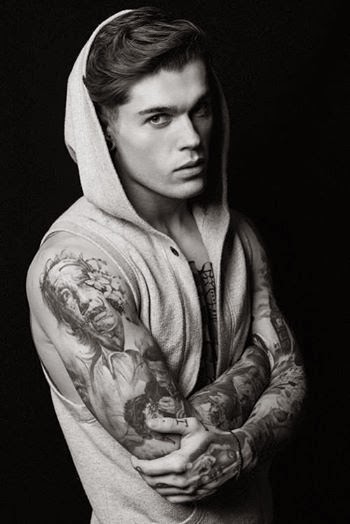 *Disclaimer - I am not the owner of this picture. I found it on the web for causal fun use on my blog for which I receive no compensation. If this picture belongs to you (you are the copyright owner) please let me know and I will remove it.
Posted by My Book Boyfriend at 4:52 AM